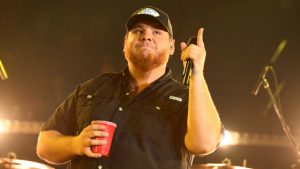 Tuesday at the Corsair Distillery in Nashville, Luke Combs celebrated his fourth #1 hit in a row, “She Got the Best of Me.”

Talking with a group of journalists before the party, the North Carolina native agreed that one of the reasons for his success is that he has a lot in common with his fans.  In fact, Luke says he’s changed very little since “Hurricane” became his first #1 in 2017.

“Somebody showed up at my house yesterday for an interview or something like that,” he explained, “and I was out cleaning the cat litter thing out. And they were just floored, like ‘Oh, my husband doesn’t even do any chores!'”

“I don’t know, like I really just am the same, I’ve just got nicer boots now,” Luke continues. “No, it really is, like I’m just the same as I was in college, people just recognize me at the grocery store now. That’s really the only difference.”

Luke’s currently in the middle of his sold-out Beer Never Broke My Heart headlining tour. Given the intense demand for tickets, it seems likely might extend the trek.

“Yeah, I would obviously love to,” he says candidly. “I think it just depends on, you know, how fat and tired I am by the end of the summer,” he adds with a laugh. “That’s probably kinda it, you know?”