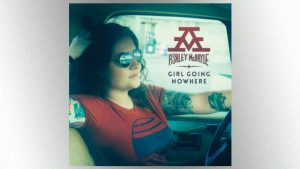 If you check out Ashley McBryde‘s debut album, Girl Going Nowhere, the Arkansas native will take you to “A Little Dive Bar in Dahlonega,” just like her breakthrough hit says.  But she’ll also introduce you to her father, through a very personal track called “The Jacket.”

The autobiographical tune tells the story of the denim coat her dad wore, which he eventually passed on to her. Unfortunately, when Ashley was away recently playing a gig, a thief vandalized her truck and stole her prized possession.

“The jacket was in my truck in East Nashville, and we were in Charlotte,” she tells ABC Radio. “We were only gone for 24 hours. I parked right in front of a camera, in a secured parking lot. And somebody busted out the window of my truck and took the jacket.”

“It is the most disgusting-looking piece of denim ever,” she explains. “It’s got a buckskin collar, hand-sewn. No one would ever want that piece of clothing. But somebody did, and they took it.”

Though Ashley’s fans and the tight-knit music community have tried to track down the irreplaceable jean jacket, it still hasn’t turned up.

“All of Nashville’s been looking for it,” she goes on.

She laughs, “All the vintage shops have pictures of it, up in there. It’s unmistakable, this jacket. If you saw it, you’d be like, ‘That’s gross. And that’s Ashley’s jacket.'”

In September, Ashley launches her first series of shows as a headliner. Tickets for the Girl Going Nowhere Tour go on sale Friday.