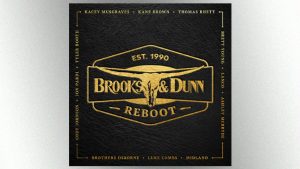 Brooks & Dunn now have another number one on their hands, as their Reboot album debuts at the top of Billboard’s Top Country Albums chart this week.

Not only is it the first time the duo has topped the chart since 2009, it also gives them their tenth top-10 record on the all-genre Billboard 200 — the most of any country duo or group to date.

“We always said that after all the crazy highs we’ve had along this journey, that the most important thing to us was that the music that held up over time,” Ronnie Dunn says.

“To have a number one record with these songs we love is wild and we’re so happy to have worked on this project with so many current talents. It is a testament to the power of collaboration.”

“These songs are so important to us,” Kix Brooks adds, “and we’re so thankful that they have had this chance to have new life breathed into them. We had so much fun in the studio with everyone; it’s been a really special project for us.”

It’s just the beginning of a very big year for Kix and Ronnie: In October, they’ll officially be inducted as the newest members of the Country Music Hall of Fame.