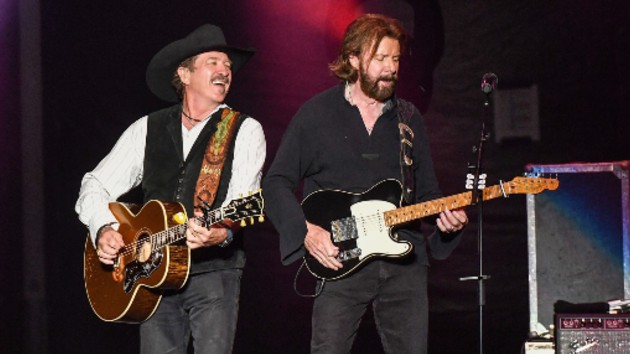 Monday morning in Nashville, Brooks & Dunn, Ray Stevens, and music executive Jerry Bradley were announced as the newest inductees into the Country Music Hall of Fame.

Reba was to have hosted the announcement, but was unable to make it due to illness. Local air personality Bill Cody did the honors instead.

While each had separate solo careers, it wasn’t until Kix Brooks & Ronnie Dunn joined forces that they were able to rule the country charts. Their 1991 debut album Brand New Man spun off four #1 singles and started a winning streak that basically didn’t quit until the two announced in 2009 that they were parting amicably.

Over the years, the duo won 17 CMA Awards, 26 ACM Awards, and two Grammys, some 20 #1 hits, and numerous multi-platinum albums.

In 2014, Brooks & Dunn reunited for a Las Vegas residency with their pal Reba, which has continued on and off. They recently they announced an album called Reboot, featuring remakes of their big hits with today’s country stars.

Ray Stevens has been a singer, songwriter, comedian, producer and TV host, but he’s probably best known for his 1974 #1 hit “The Streak,” and his 1970 smash “Everything Is Beautiful.”

After getting his first record deal in 1961, Stevens focused on comedic songs like “Ahab the Arab,” “Gitarzan” and “Harry the Hairy Ape.”  He eventually became a regular on The Andy Williams Show, and hosted his own series in 1970.  After moving into country music, he scored with a mixture of serious songs and comedy records, such as “Misty,” “Be Your Own Best Friend,” and “I Need Your Help Barry Manilow.”

In 1991, Stevens opened his own theater in Branson, Missouri, and benefited from that town’s booming entertainment scene. He also started selling a series of wildly successful comedy videos. He continues to record and release music and videos, and has also created several TV shows for online, cable and digital outlets. In 2018, he opened a performance venue in Nashville called CabaRay.

Jerry Bradley is the son of legendary country music producer Owen Bradley and nephew of famed session guitarist Harold Bradley. He learned how to produce and engineer records from his dad, and then worked in publishing, before becoming Chet Atkins‘ assistant at RCA Records. Jerry Bradley served as head of RCA Nashville from 1973 to 1982, signing acts like Alabama, Eddie Rabbitt, and Ronnie Milsap, and playing a key role in the Outlaw Country movement. From 1986-2002, he was head of the Opryland Music Group of publishing companies.

The new members will officially join the Hall during the Medallion Ceremony in the fall.