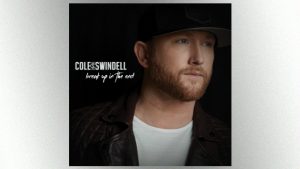 Cole Swindell marked his latest #1, “Break Up in the End,” with a party Wednesday evening at Topgolf in Nashville.

It was also a bit of a pre-Grammy celebration, since the tune — one of the rare chart-toppers Cole didn’t write himself — is up for Best Country Song, an award that goes to the writers.

“I wanted to get it to the top, but not just that — a Grammy nomination!” Cole observes. “Nobody can ever take that away…”

“This song, it hit me hard enough to make me want to record it, make me wish I hadn’t lived it, wish I had written it,” Cole laughed, hinting at how personal it is for him.

“To have written most of my singles… that’s a blessing,” he reflects. “But for people to believe in you enough to give you a song that means the world to them — and I know how that feels — it’s even more special.”

The Georgia native still has some Grammy dreams of his own, however.

“Before I ever moved to Nashville,” Cole recalls, “I was hanging out one night, and we ended up over at [songwriter] Hillary Lindsey‘s place. And she had a Grammy for, I think, a Carrie Underwood song up there.”

“And I remember just seeing that and being like, ‘I just want to write a song…'” Cole admits. “The Grammy, that might not ever be in my future… That’s the biggest stars in music,” he says humbly.

“I love country music… but to… have sung a song… [that’s] nominated for a Grammy… to be a small part of it… it’s amazing, actually.”

Jessie, Chase, and Jon are all headed to Los Angeles for Sunday night’s ceremony.