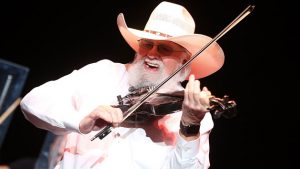 Luke Combs, Luke Bryan and Tim McGraw are among the many country stars paying tribute to Charlie Daniels in the wake of his passing.

The country legend passed away on Monday at the age of 83 in Hermitage, Tennessee after experiencing a hemorrhagic stroke. Not long after the news broke, many artists who admired Charlie turned to social media to share their condolences.

“Thank you for all your contributions on and off the stage. God bless you Charlie Daniels,” Luke Bryan writes, calling him a “true patriot” and “country music icon.” Jason Aldean stated that he is “heartbroken” over “The Devil Went Down to Georgia” singer’s passing, citing him as “one of the nicest/kindest people I have ever met.”

Tim echoed this sentiment, sharing how he grew up listening to Charlie’s music and upon meeting the legendary star, “he was one of the most genuine, kind and thoughtful folks I’ve ever run across.”

Brad Paisley also reflected on his time with Charlie, sharing a collage of on stage and behind-the-scenes photos of him with the southern rock star. “I’m so sad he’s gone,” Brad says. “We have so many memories together, and I am so blessed to have known him.”

“The country music flag is flying at half mast today. RIP Charlie Daniels,” Luke Combs commemorates on Twitter, with Chris Young noting that he is “absolutely gutted” over Charlie’s death. “What a life lived, and what an incredible human being,” he marveled in a Tweet.

Jake Owen also referred to Charlie as the “nicest” country star he encountered and applauded the legacy he leaves behind. “It doesn’t get better than Charlie Daniels,” Jake remarked.

Here are other reactions from Charlie’s peers and friends:

Travis Tritt: “Thank you for being such a friend, mentor and inspiration to me. I will always be grateful.”

Gretchen Wilson: “I never met a better man than @CharlieDaniels. He was so inspiring in so many ways.”

Jamey Johnson: “Thank @CharlieDaniels you for teaching us all the difference between a violin and a fiddle. I hope you enjoy your new one made of gold.”

Ricky Skaggs: “One of my favorite people on this earth Charlie Daniels has gone on to his eternal reward today.”

Walker Montgomery: “So sad to hear about the passing of a great man and an American Legend.”

Ray Stevens: “Such a huge loss. You will be missed, Charlie.”