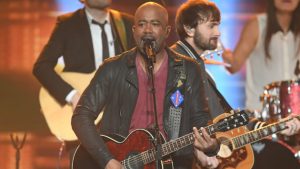 During last year’s CMA Fest, Darius Rucker was sitting at the top of the charts with “If I Told You.” By the time this year’s fan gathering takes over Nashville June 7-10, the South Carolina native could very well repeat that feat, since “For the First Time” is currently sitting at #3 on the country ranking.

Darius’s latest single inspired the title of his most recent project, When Was the Last Time, an album that turned out to be even more autobiographical than he intended.

“I didn’t mean for it to be, but in a huge way it is. Totally,” Darius tells ABC Radio. “I mean, I listen to it now and I go, ‘Wow, a lot of this is exactly where I am in life or where I was just right before this time.'”

“And…some of the songs that are autobiographical, I didn’t even write,” he continues. “But they’re still so me, and that’s why I cut ’em.”

The Hootie and the Blowfish frontman may be plenty comfortable being transparent in his music, but that doesn’t mean he’s itching to write his life’s story.

“No,” he says in response to the question. “Because if I did it, it’d have to be– It’s like the reason I won’t write a book is because I’m gonna be honest and real if I do it, and sometimes honest and real is not the way you wanna be.”

Darius heads out on the co-headlining Summer Plays On tour with Lady Antebellum July 19, before reuniting with his Hootie bandmates to play Atlanta’s Suntrust Park with Jason Aldean July 21.

Thursday night, watch for Darius on The Tonight Show Starring Jimmy Fallon before he gets up early to play the Today show’s concert series Friday.