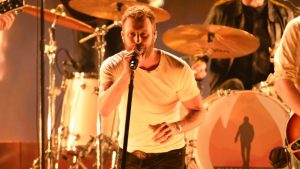 Thursday night, the first round of the NFL Draft gets underway in downtown Nashville.

Dierks Bentley‘s just one of the country stars who’ll be part of the entertainment as the football festivities take over Music City. The Arizona native sees the draft coming to town as just another sign of the massive expansion happening in the country music capital right now.

“I feel like every weekend there’s a new crazy amount of people coming to town or some events happening that’s gonna blow the previous record on the weekend before,” he observes. “It’s crazy living in this town.”

“Being on the Airport Authority board…” Dierks continues, ” Every month it’s record numbers of people coming through our airport. Nashville’s growth is unbelievable.”

Dierks will do a free concert on Saturday, which is also the day of the St. Jude Rock ‘N’ Roll Marathon.

“Having the draft here the same weekend as the marathon,” he adds, “I mean it’s like another all-time high for Nashville…”

“I was here when the Titans came, and it was a really big deal,” Dierks recalls. “Obviously, there’s a big football community here in Tennessee and the Midsouth. To have the draft here… is gonna be incredible.”

“I think country music goes down pretty well with a lot of our southern football fans…” he points out. “So to have the draft here and get a chance to be one of the guys up onstage leading the party is really exciting for me.”

Luke Bryan will be part of ABC’s prime-time coverage of the draft, which starts at 8 p.m. ET on Thursday.

Then on Friday night, Tim McGraw will do a free concert in downtown Nashville, ahead of Dierks’ show on Saturday.