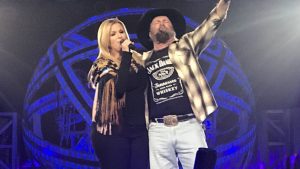 Trisha Yearwood shared a cryptic series of photos on her socials Monday, along with the hashtag #LBF. After a while, it was apparent the two-time CMA Female Vocalist of the Year was posting parts of a larger picture — one that eventually revealed a sexy pose where she’s wearing a man’s hat, coat and tie, with her shirt unbuttoned.

In the end, the shot does look an awful lot like an album cover, and we do know Trisha’s been working on new music this year. Trisha hasn’t released a full-length solo studio album of all-new material since 2007’s Heaven, Heartache and the Power of Love.

Trisha’s husband, Garth Brooks, didn’t give away any significant details during his regular Inside Studio G chat Monday night on Facebook, though he did comment on how much he loves the photo.

The reigning CMA Entertainer of the Year also revealed he’ll debut his new single on next week’s CMA Awards. It’s a ballad dedicated to his wife that he calls “Trisha’s Song,” which will go to radio the next day.  Previously, Garth had indicated the CMA Awards producers had rejected the idea.

You can tune in to hear Garth’s new song Wednesday, November 14 at 8 p.m. ET on ABC.