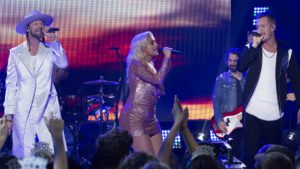 “Meant to Be,” Bebe Rexha’s collaboration with Florida Georgia Line, isn’t just a catchy pop hit: It’s also the second-longest-running #1 hit in the history of the Billboard Hot Country Songs chart.  Bebe thinks the unexpected duet has become so popular because it’s “honest.”

“I think Florida Georgia Line was honest with their sound and I was just honest with who I was,” Bebe tells ABC Radio. “I wasn’t trying to sing in a country accent…we’re just, like, doing what we do, and we were real, and I think it just happened so naturally.  And I think people can really sense that.”

As for the song’s success on the country chart, Bebe says, “It’s just unexpected and incredible…that’s just life. [I’m] just learning that life is just full of surprises and you just never know what’s gonna happen!”

While Bebe had never actually heard of Florida Georgia Line before they wrote “Meant to Be,” she’s now become very familiar with the rest of the biggest names in country music.

“I went to the [Academy of Country Music Awards], and it was so incredible, the love, and they accepted me,” she gushes. “I thought it was so awesome, and met so many cool artists.”

So does that mean she plans to continue working in the country field?

“Definitely, for sure,” for sure. “Not country music as my genre, but [I] will for sure collaborate with some more country artists.”