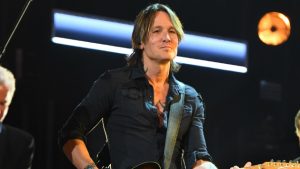 Keith Urban’s new single, “We Were,” is a rare exception in his catalog: It’s one he didn’t write himself.

The romantic, nostalgic tune was co-written by his label mate Eric Church.

“We were leather jackets hangin’ on to a Harley/two heartbeats in the moonlight/We were both feet hangin’ out/over the edge of a water tower skyline,” Keith sings on the track, which he co-produced.

“At least there’s a little bit of sweet in the bitter/though a part of me is always gonna miss her,” he continues. “I am who I am/I just miss who I was when we were.”

Keith also name checks rock band Def Leppard’s 1988 hit “Pour Some Sugar on Me” in the new song.  You may recall in his hit from a few years ago, “Wastin’ Time,” he gave a shout-out to Guns ‘N’ Roses.

“We Were” is the lead single from Keith’s forthcoming album, the follow-up to last year’s Graffiti U. It’s available to stream or download now, or you can check out an audio-only version on YouTube.

Of course, “We Were” isn’t the first creative collaboration between Keith and Eric. They hit #1 in 2015 with “Raise ‘Em Up.”