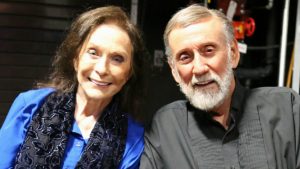 There’s no doubt Loretta Lynn has had her share of health challenges in the past couple years. But this weekend, she was feeling well enough to go see soon-to-be Country Music Hall of Famer Ray Stevens at his Nashville CabaRay venue.

“I was so honored that my very dear friend Loretta Lynn and her family visited the CabaRay Friday night,” Ray remarked. “Like I told the audience, ‘There are queens and first ladies of country music, but there’s only one Coal Miner’s Daughter!’ Bless you Loretta. You are a treasure!”

Appropriately, the 87-year-old sat in the Owen Bradley VIP booth — named for her longtime producer — during the dinner concert.

“It was a huge treat for me to go to Ray Stevens’ show at CabaRay this past weekend,” Loretta reflects. “He kept me laughing the whole time!”

In addition to his comedy hits like “The Streak,” “Gitarzan,” and “Mississippi Squirrel Revival,” Ray also delivered his number one pop hit from 1970, “Everything Is Beautiful.”

“He’s such a wonderful entertainer,” Loretta continues. “I am so happy that he’ll be inducted into the Country Music Hall of Fame this year.”

“Love you, Ray. Keep the laughs coming!” she adds.

Stevens will officially join the Hall of Fame during the annual Medallion Ceremony in October.

In 2017, Loretta herself turned out to preside over the induction of Alan Jackson.