Hall of Fame member Merle Haggard passed away today, on his 79th birthday.  His son, Ben Haggard, posted on Facebook Wednesday, “A week ago dad told us he was gonna pass on his birthday, and he wasn’t wrong.”

Ben Haggard continues, “A hour ago he took his last breath surrounded by family and friends. He loved everything about life and he loved that everyone of you gave him a chance with his music. He wasn’t just a country singer.. He was the best country singer that ever lived.”

Haggard’s post is accompanied by a photo of him holding his father’s hand. 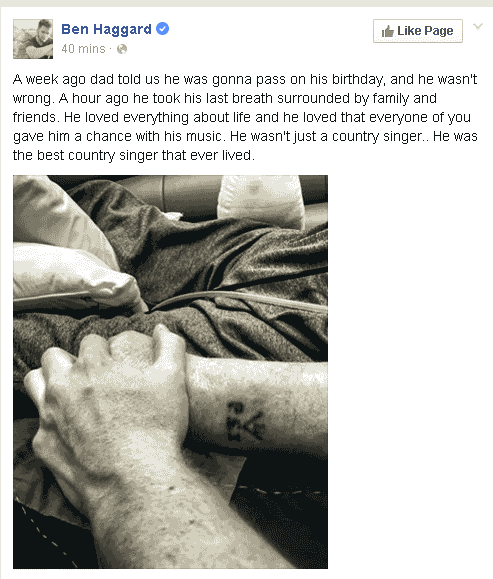 From “Okie from Muskogee” and “Mama’s Hungry Eyes” to “Mama Tried” and “Branded Man,” Merle Ronald Haggard lived the songs he sang. Before he was born on April 6, 1937, his parents moved from the dust bowl of Oklahoma to eventually raise him in a converted boxcar in California. The death of his father when he was still a boy seemed to pave the way for a rebellious streak in Merle, who landed in a series of juvenile detention facilities and reform schools as a teen, hopping trains and committing a series of low-level crimes that eventually landed him in the notorious San Quention Prison.

Along the way, however, a meeting with his hero, Lefty Frizzell, encouraged Merle to keep pursuing his musical dreams, as did Johnny Cash‘s legendary January, 1958 concert at San Quentin — which 20-year-old Haggard witnessed as one of the inmates.

By the time Merle was paroled by the California prison system, he was only a few years away from becoming one of the architects of the Bakersfield sound, along with Buck Owens. Bonnie Owens, who held the unique distinction of being married to both men — first Buck, then Merle — would be pivotal in his success and a lifelong fixture in his career.

Merle first cracked the top 30 in 1964, singing the duet “Just Between the Two of Us” with Bonnie, who was considerably more well-known at the time. The Academy of Country Music’s first Top Female Vocalist in 1965, she believed so much in Merle she insisted his singles be included in the mail-outs with hers. By 1970, Merle had become the ACM’s first Entertainer of the Year.

Merle found much of his initial success recording semi-autobiographical songs written by Liz Anderson, the mother of 1970 Top Female Vocalist winner Lynn. His first number-one came in 1967 with her song “I’m a Lonesome Fugitive.” He named his band The Strangers after the 1965 hit she wrote, “(From Now On All) My Friends Are Gonna Be Strangers.”

Merle continued to have a marathon string of hits through the seventies and eighties, if not happy marriages. His wife and fellow performer Leona Williams penned two of his biggest hits while they were wed — 1983’s “You Take Me For Granted” and 1984’s “Someday When Things Are Good (I’m Gonna Leave You).”

In 1993, Haggard married wife number five, Theresa, who was by his side until the end. Their son Ben later joined him on the road, playing lead guitar in his father’s band.

Haggard was inducted into the Country Music Hall of Fame in 1994. Before then, California Governor Ronald Reagan granted him a full pardon for his youthful indiscretions.