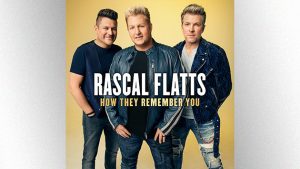 Even though the members of Rascal Flatts are going their separate ways, music will still be a prominent part of their lives this year.

After announcing a year ago that they were disbanding after 20 years, Rascal Flatts’ Gary LeVox, Jay DeMarcus and Joe Don Rooney are moving on to new ventures that range from record labels to goat yoga.

Gary is in the process of recording his own album, offering fans a taste of his solo work with “Christmas Will Be Different This Year,” in addition to teasing a Christian song. When he’s not making music, Gary is tending to his farm, and has picked up a surprising new activity — goat yoga.

“It’s weird but there’s nothing to do and I own that farm, so I’m raising goats and we’ve got yoga goin’ on,” he says.

Meanwhile, Jay is focusing on developing talent at his Christian label, Red Street Records. “I’m really devoting a lot of time to that. So, we’re not slowing down,” he professes.

Joe Don has been honing in on songwriting, a passion he’s focused a lot of time and energy on during the COVID-19 pandemic. “That’s that one great outlet that I’ve had and I’ve really concentrated on with all this quarantine and just down time, is trying to write something good if I can,” he shares.

“I think there’s no doubt that we’ll all be doing some type of something in music because that’s our passion, it’s what we love,” he adds of his bandmates.

The group’s single “How They Remember You” is currently in the top 20 on the Billboard Country Airplay chart.