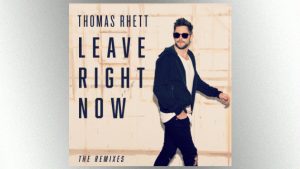 The remix of Thomas Rhett‘s “Leave Right Now” is getting such good response in Europe, he’s shot a music video for the song.

In the clip, TR pursues a mysterious blonde woman through a crowded party at Nashville’s Frist Art Museum. Though you never see her face, it’s worth noting that the mystery female looks a lot like Thomas’s wife Lauren, who’s starred in several of his previous projects.

The new video is an extension of the Leave Right Now — The Remixes set that came out in March. The original track appears on TR’s current Life Changes album.

“It’s unbelievable to be able to continue to release music that inspires me and be embraced by fans not only at home but overseas too,” Thomas says of his success in Europe. He’ll take his tour back to London in November.

You can check out the new “Leave Right Now” video on YouTube.