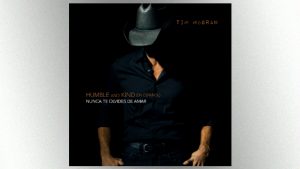 More than two years after Tim McGraw released his inspirational hit, “Humble and Kind,” in English, the superstar is putting out a new Spanish version of the song.

“Recording this song in Spanish has been my hope of making it truly universal,” Tim tweeted. “I know my Spanish may not be perfect, but I hope that you can feel the sentiment and intention behind the song.”

The English version of “Humble and Kind” was a multiple-week number one, and won the CMA Song of the Year trophy, as well as a Grammy.

Tim also shot a new version of the “Humble and Kind” video to match the new Spanish recording. You can check it out on YouTube now.