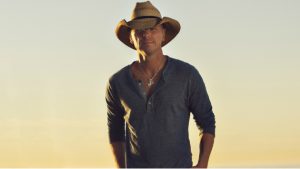 Kenny Chesney captures the vibe of the fans he calls No Shoes Nation in his new video for “Get Along.”

The clip was shot at the opening concert on his Trip Around the Sun Tour last month at Raymond James Stadium in Tampa, Florida.

“It made for a couple long days, doing a video the same time we were starting a tour…” Kenny says. “But I wouldn’t have changed anything for the world!”

The superstar from East Tennessee believes the attitude of his fans perfectly matches the message in “Get Along.”

“The whole point of the song is to look for your common ground instead of worrying about your differences,” Kenny explains. “And when I look out into the crowd, that’s what I see: people who are having a great time, getting along and making the most of every single minute.”

In addition to performance footage from the show, the “Get Along” video also showcases the fun Kenny’s fans have before the concert ever starts.

“It takes a lot to try to keep up with the No Shoes Nation, with their rolling Tiki Bars, tons of sand, Blue Chair Bay cocktails and wading pools,” Kenny observes. “They have as much fun waiting to get into the show as they do at the concerts, and I love that! I wanted this video to be a mix of how their world works and the way their passion inspires all of us up onstage.”

“Get Along” is the lead single from Kenny’s Songs for the Saints album, which comes out July 27. You can check out the new video on YouTube.