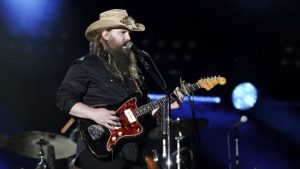 With “Millionaire” currently at number two on the chart, Chris Stapleton may very well be on track to have his second chart-topping single in a row. His previous number one, “Broken Halos,” won both Single and Song of the Year at the CMA Awards back in November.

The Kentucky native could add six more trophies to his collection at the Academy of Country Music Awards in Las Vegas next month. Even so, Chris says his outlook is still pretty much the same as it was when the accolades started rolling in back in 2015.

“I hope it hasn’t changed a whole lot, and I don’t think that it has,” he reflects. “You know, these things are fantastic things to win, but when you get nominated or invited to these kind of parties, in my estimation, you’ve already won.”

“And you’ve already gotten to be far beyond anything, you know, anybody who’s a musician could ever dream of getting to do,” Chris adds. “And we get to do that every day. We get to live that every day.”

At the ACMs, Chris is up for for Entertainer, Male Artist, Album and Song of the Year. In the Album and Song categories, he could also take home extra trophies for producing From A Room: Volume 2 and writing “Broken Halos.”  But Chris says he doesn’t get too focused on winning.

“As far as thinking about going into something, I’m always genuinely surprised to win anything,” reveals, “and I’m always grateful for it.”

The 54th Academy of Country Music Awards will air Sunday, April 7, live from MGM Grand Grand Arena in Vegas on CBS. You can tune in to watch starting at 8 p.m. ET.