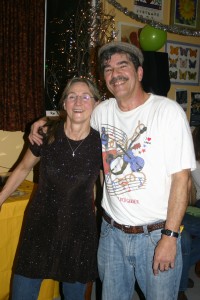 As an Air Force brat, Jack never lived in one place longer than three years for the first 24 years of his life — and that was only twice: Virginia for the junior high years after returning from England and France, then northern California for the last three years of high school: a tough place to be a Dodger fan. So when JJ (known as “The Groove” during college for carrying a transistor radio everywhere) landed in Aspen, Colorado, after getting a Masters in Journalism at UCLA and getting out of the Air Force in 1971, he stopped rambling.

“A couple college buddies from CSU opened a health food store in Aspen, and they let me plunk my sleeping bag down in a shed behind the store,” The Groove says. “I had a backpack, a 35mm Minolta camera, my Sierra Design bag, and an old Epiphone guitar– that was it.”

Moving west because the rent was cheaper, Jack eventually wound up sharing a casa with ten girls/guys where his share of the rent was $22/month. Playing guitar in pubs and bars from Basalt to Rifle barely covered expenses, so JJ decided to use the GI Bill to get a teaching certificate from Western State College at Gunnison:

“Then I could substitute teach by day and play in clubs at night until I became a rock ‘n roll star.”

Well, he wound up taking over the English job from the legendary Kathryn Senor at Riverside Junior High… and 30 years later retired from public school teaching after coaching football, basketball, baseball, and track, along with Battle of the Books, all at the middle school level. “People would say I was crazy for teaching middle school that long, but I loved those kids — and it kept me young,” Jack said, adding that a line from a Bob Dylan song summed up his experience well: Ah, but I was so much older then, I’m younger than that now!”

Early in Jack’s teaching career, he began covering Rifle High School sports for local newspapers, including the defunct Rifle Tribune, and then survived more than a half-dozen sports editors to be the RHS stringer for the Glenwood Post (now Post-Independent).

A strange circumstance in Jack’s career includes the fact that he now works for two of his former junior high students: He teaches Humanities twice a week for Renee Miller, who with husband David, founded the Garden School, a classical Christian school with campuses in New Castle and Basalt, and while still teaching at Riverside, got a call from Gabe Chenoweth, general manager of KMTS radio station in Glenwood Springs, using those immortal words,

“I’ve got an offer you can’t refuse,”

…to be the “color man” alongside Ron Milhorn as KMTS began broadcasting high school sporting events. A dozen years later, the team has won numerous broadcasting awards and are still on the road, covering primarily Glenwood Springs, but have also followed Rifle, Aspen, Basalt, Roaring Fork, and Coal Ridge teams to the state tournament in various sports.

Jack has now been teaching at the Garden School for six years along with lovely wife Linda (whom he met at the No Name house, and they recently celebrated their 37th anniversary). Linda and Jack have three children: Amber is married to former Marine Ryan Williams, and teaches reading to 4th-and-5th graders in Lander, Wyoming; Jennifer, is also a teacher, near Wasilla, Alaska, and mother to darling granddaughter Joslin Eleanor. Joslin’s daddy is former ski instructor at Sunlight, Conrad Daley — they are buying property in Willow, AK., and have begun harvesting logs to build a house there; son Isaac was born prematurely in 1985 and only lived 12 hours, but the family looks forward to a reunion with him one day in heaven.

Jack’s love of music has remained a part of him through this journey, and though he never became a recording star (at least not yet), he is a worship leader for New Hope Church (meeting in Coal Ridge High School), has recorded three CD’s (including a live session with Larry Gruber at Glenwood Music), sings at weddings, funerals, Valentine’s Banquets, Christmas Eve services, and has written close to 200 songs.