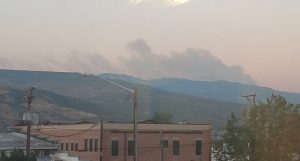 The Cache Creek Fire, eight miles southwest of Rifle, has burned 400 acres and is 0%contained. The Rocky Mountain Incident Management Type 2 Blue Team took over operations this morning at 6. While structures are within a couple miles of the fire, they are not considered threatened at this time.

The Lake Christine Fire has burned 12,588 acres and is 87 percent contained as of yesterday afternoon. Some of the crews battling the blaze have been deployed to other fires. Holy Cross Energy officials said that three of four power lines were back up and running. Sixty-five damaged power poles between Holy Cross and Xcel Energy have been replaced. Fire management officials said there will be another community meeting, hopefully the last, tonight at 6 at Basalt High School.

Elsewhere in the region…

The Cabin Lake Fire, between Buford and Meadow Lake. is over 200 acres and 0% contained. Two hotshot crews are working directly on the north flank of the fire closest to structures. Helicopters are working in tandem with ground crews by dropping water to keep the fire from spreading and to cool hot spots. Two engines will continue to focus on structure protection throughout the day at Seven Lakes Lodge. The Buford-New Castle Road is closed at the intersection of County Road 10 and County Road 17 and south to the Meadow Lake Campground turnoff; the Meadow Lake Campground remains open,

The Red Canyon Fire, northeast of Douglas Pass near Rio Blanco County Road 27, is estimated at 1,500 acres. Structures are threatened, no containment reported.

The Indian Valley Fire, northwest of Meeker, is a little over 6,300 acres and is 67% contained.

Whiskey Fire – County Road 109 and County Road 25 is at 39.50 acres, according to the Rio Blanco Sheriff’s Office, not 150 acres as previously reported. No containment reported.