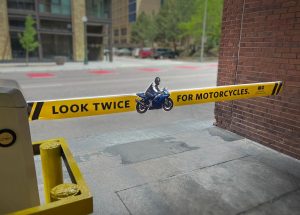 Each summer, as the number of motorcyclists on the road increases, so does the number of motorcycle deaths in accidents where, in many cases, drivers of larger vehicles simply didn’t see them.
In an effort to help reduce the number of motorcycle accidents in the state, officials with the Colorado Department of Transportation have launched a new safety campaign called “Look Twice” to encourage all drivers to take an extra look before pulling out of parking lots onto roadways, and when using interstate entrance and exit ramps. Special highway signing for the campaign will primarily target trouble spots in the Metro Denver area that have seen the most fatalities in recent years, but C-DOT will also be encouraging drivers statewide to always keep their eyes open for motorcycles, scooters, and pedestrians.
CDOT says motorcycles only account for about 3% of all vehicles on the road but suffer about 20% of vehicular accident deaths.  Colorado had 137 motorcycle fatalities last year, and officials are afraid the state is again on track to break that record; the state has already seen a six-percent increase in the number of deaths this year, with nearly 80 fatalities so far.