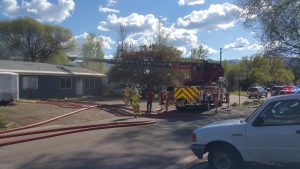 According to a press release from the Carbondale Fire Department, the fire started in a bedroom of the single story duplex on Garfield Avenue and was reported shortly after 4:30 this afternoon. When firefighters arrived, the entire bedroom was on fire, with flames coming out the windows. The exterior siding of the home was also starting to catch fire.

Carbondale Fire Chief Rob Goodwin says firefighters were able to enter the home and contain the fire damage to the bedroom and a nearby hallway. The residents were home at the time and were able to escape the house without injury, however they cannot return home due to extensive smoke damage. They will receive aid from the Red Cross for tonight, but will need long term housing after that.

The Carbondale Police Department is credited with rescuing the family pets. The cause of the fire is under investigation but is not thought to be suspicious in nature. The is estimated to have caused about $150,000 in damage.