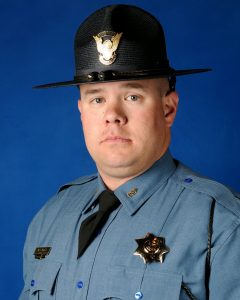 DEER TRAIL, Colo. (AP) – A Colorado state trooper has died after being struck by a car while on the scene of an accident on Interstate 70.

The Colorado state Patrol says 37-year-old Trooper William Moden was outside of his patrol car assisting with a serious injury crash when he was hit by another vehicle that drove through late Friday night.

The incident happened on I-70 between Peoria and Deer Trail.

A fellow trooper at the scene started to render aid, and Moden was transported to University of Colorado Anschutz Medical Campus where he was pronounced dead.

In March, another state trooper was struck and killed by a car while helping a motorist whose vehicle slid off the rode during a blizzard.