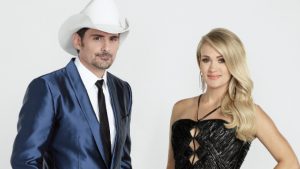 Next Wednesday, Brad Paisley and Carrie Underwood host the CMA Awards for the eleventh time.

It’s a year that holds lots of potential — both comic and dramatic — since Carrie is expecting her second child.

He doesn’t think it’s likely, but Brad has a plan, should she go into labor.

“She looks further along than she is,” he explains. “That would be a pretty early baby.”

“But, oh yeah!” Brad adds. “You think I’m not ready? You think we don’t have a satellite truck ready to go? I’m pretty sure we’ve already figured out the route to hospital…”

“Most of the time it’s a new couple that figures that kind of thing out,” he continues, embracing the comic potential of the possibility. “Well, we have an entire TV show… Like, the quickest route to the hospital for her. Where could they get a great angle? I mean, that could be the greatest awards show of all time.”

Carrie’s known for her frequent wardrobe changes, but Brad worries her current state may slow her down.

“She does have a speed bump in the changing process this year,” he jokes. “She looks further along than she is, I think. It’s just all stomach. She hasn’t changed at all otherwise… She’s just carrying around a ball. So it’s gonna be really interesting to see how that affects the wardrobe changes.”

It turns out Brad’s full of ideas.

“There’s lots of potential there,” he jokes. “I think they should do, like, the Earth. Like a dress that’s the Earth in the middle, and then the rest of the dress is stars and the other planets.”

“Don’t you think that would be great? Like, play off the big watermelon.”

You can tune in for all the fun next Wednesday starting at 8 p.m. ET on ABC.