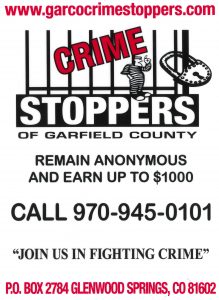 Glenwood Springs—“McGruff the Crime Dog” is calling it quits in Garfield County.  Due to a general lack of interest from local police departments and the explosion of social media, the Garfield County Chapter of Crimestoppers is pulling the plug.  The once-thriving chapter disbanded in the late 90’s only to revived for one last go-round in the mid 2000’s when at least 9 volunteers served on the board of directors.  At it’s peak, the familiar 945-0101 phone number generated a great deal of interest from anonymous callers providing tips on criminal activity in exchange for cash rewards.  Depending on the severity of the crime, rewards ranged from $50.00 to $1,000. It was the volunteer board’s job to determine, based on a formula, the size of each reward.  The board also spent time raising funds and increasing public awareness.  While other chapters around the state and the world continue to serve their respective communities, the commitment of time and money has become too burdensome for Garfield County.  Crime will still be fought however as local law enforcement agencies utilize Facebook, Twitter and other social media outlets to post information and receive tips.  In the meantime, instead of calling the old Crimestoppers tipline, just call the county dispatch center at 625-8095.