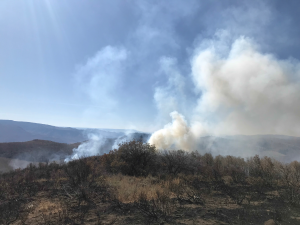 The Forest Service and BLM eased some of the closures around the Middle Mamm fire today as management of the fire transitioned to a local Type 4 Incident Management Team. Approximately 70 people will continue to patrol the fire and conduct mop-up operations. Smoke from the fire will continue to be visible, especially during windy times. The current size of the fire is 1,069 acres. Current closures include the entire Middle Mamm drainage, Gant Gulch, and a portion of Battlement Trail A (Forest System Trail 2160). A map of the closure area can be found below. BLM and Grand Mesa National Forest closures in the area of the fire have been lifted. A Temporary Flight Restriction remains in effect near the Middle Mamm Fire.

Meanwhile, the BLM says unburned fuel within the perimeter of the Roan Plateau Fire continues to burn, with smoke also visible, especially on windy days. Crews continue monitoring the area of the 600 acre prescribed fire that was started in late September to improve big-game habitat and promote new Aspen growth. The picture above of the Roan Plateau Fire was taken today.