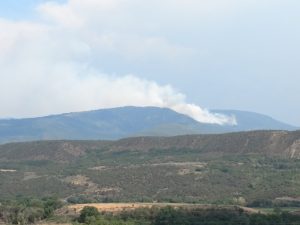 The Cache Creek Fire, burning eight miles southwest of Rifle, ignited on July 28, is estimated at over 100 acres and is 0% contained. Structures are located approximately 2 miles north and east of the fire, but they are not considered threatened at this time. The cause of the Cache Creek Fire is not known.

The Lake Christine Fire has burned 12,588 acres and was 82 percent contained as of Monday. All pre-evacuation notices have been lifted.

Elsewhere in the region…

The Cabin Lake Fire, 5 miles south of Buford (7 miles north of Meadow Lake), started on July 29. It’s estimated to have burned over 200 acres and is 0% contained. It’s not known how it started.  Garfield County Road 245 is closed at the Meadow Lake Turnoff at the request of the Rio Blanco County Sheriff’s Office.

The Red Canyon Fire, northeast of Douglas Pass near Rio Blanco County Road 27 is estimated at 1,500 acres. Structures are threatened, no containment reported.