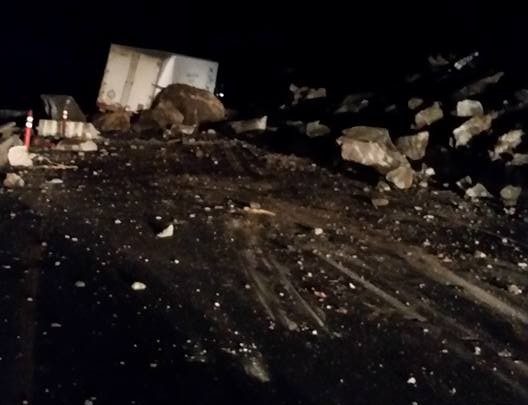 The Colorado Department of Transportation says Interstate 70 between Glenwood Springs (Exit 116) and Gypsum (Exit 140) will remain closed until at least Thursday afternoon.  C-DOT Communication Director Amy Ford says between now and then, crews have a lot of work to do, including rock scaling and mitigation, as well as repairing the road surface.

Once the road is deemed safe to open, a pilot vehicle will begin escorting a single direction of traffic at a time through the 24 mile stretch of I-70 between Glenwood and Gypsum.  A second lane of traffic might open some time next week, allowing traffic through in both directions without a pilot car.

The road through the narrow canyon was closed around 9:00 PM Monday night due to a large rock slide near mile marker 124– further west than large slides that have occurred in previous years.

While the interstate remains closed and even during single-lane pilot car operations, travelers are advised that alternate routes may be a good idea.  The alternate routes described below assume drivers are starting in western Colorado and traveling east, and should be reversed if need be.

For the Colorado Springs area and Southeastern Colorado, take US-50 from Grand Junction (Depending on your starting location, you can also get to Highway 50 by taking Colorado Highway 133 from Carbondale to Paonia.)

General Manager, KMTS-FM
View all posts by Gabe Chenoweth →
This entry was posted in Jack Jabbour, News. Bookmark the permalink.
%d bloggers like this: