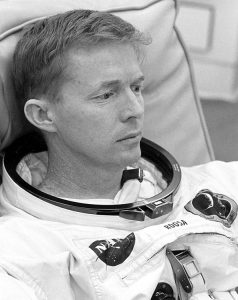 ALBUQUERQUE, N.M. (AP) — Five trees planted in New Mexico from seeds taken to the moon during the Apollo 14 mission and given to the state by NASA have all died or been forgotten, according to officials at the locations where the trees were planted decades ago.

Officials at New Mexico sites where the trees were planted decades ago admit their agencies since have lost track of the trees and some of them likely died with little notice.

Moon trees were grown from 500 seeds taken into orbit by former U.S. Forest Service elite parachuting forest firefighter Stuart Roosa during the 1971 mission. Roosa and the seeds orbited more than two dozen times around the moon.

NASA said the seedlings were planted throughout the U.S. and elsewhere around the world after Apollo 14 returned to Earth. The trees were meant to honor Durango, Colorado-born Roosa, who died in 1994.

Five of the trees that grew from the seeds, which included American sycamores and Douglas Firs, were given to then-New Mexico Democratic Gov. Jerry Apodoca.

They were planted at the State Capitol in Santa Fe, the Smokey Bear Historical Park in Capitan, the New Mexico Space Museum in Alamogordo, Gough Park in Silver City and Albuquerque’s Civic Plaza, according to newspaper archives.

The tree planting events in the mid- to late-1970s generated fanfare and intense media coverage.

“We are not sure exactly where it was but it had to have been in this particular area right here,” said Mike Shinabery, an education specialist at the New Mexico Space History Museum in Alamogordo, New Mexico, told a reporter.

“I am assuming that they may have planted it out here,” said Bennie Long, director of Smokey Bear Historical Park in Capitan, New Mexico, as she pointed to an old abandoned train depot. “Now that is just my guess.”

Raphael Drhett Baca, building superintendent of the New Mexico State Capitol, said officials there have no idea where the moon tree was planted.

Albuquerque officials said that the moon tree planted in Civic Plaza later died after the plaza was remodeled in 1996.

Other states, like Arkansas, Florida and Georgia, have kept up with moon trees and periodically organize events around them.