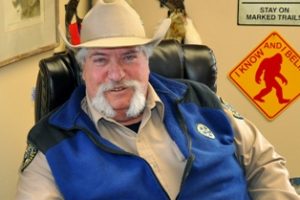 Meeker—After 40 years dealing with the great outdoors and wild animals, the man with the familiar Fu Manchu will try his hand at politics. Colorado Parks and Wildlife Area Manager Perry Will was selected by a special Republican vacancy committee yesterday in Meeker to replace Bob Rankin as the State Representative in District 57.  Rankin, who was re-elected to his final, two-year term last November, was appointed by the same committee last month to replace fellow Republican Randy Baumgardner in Senate District 8.  Baumgardner resigned amid allegations of sexual misconduct. Vacancy Committee Chairman Phil Vaughan says with the legislative session well into it’s second month, Will has a lot of catching up to do.  He says a key to success will be building alliances on both sides of the aisle.  Will says he will retire from the CPW to focus on the tasks at hand of being a state lawmaker.  After two ballots being cast, Will was the choice over 9th Judicial District prosecuting attorney Zach Parsons, Rio Blanco County Commissioner Shawn Bolton and Bob Rankin’s wife Joyce, who will remain serving on the Colorado Board of Education.  Will is expected to be sworn into office sometime next week.