Plane Skids off the Runway in Aspen 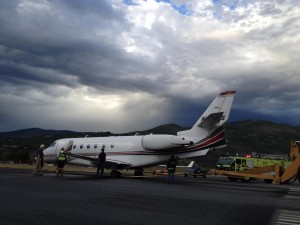 Authorities are investigating after a private jet skidded and spun off the runway while landing at the Aspen/Pitkin County Airport.

County spokeswoman Pat Bingham says the Galaxy G200 spun off the runway at about 4:45 p.m. Wednesday. Three people – two pilots and a passenger – were aboard the plane, but no injuries were reported.

Bingham says the accident caused minor damage to the runway and the jet, but there was no fuel leak. No other information has been released.

The airport was closed for several hours, but the National Transportation Safety Board gave permission to move the plane and reopen the airport around 9:00 Wednesday night.  The NTSB is expected to begin an investigation into the incident Thursday.