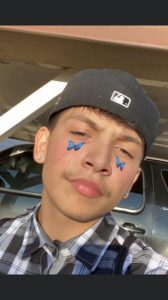 No other information is available at this time.

The Garfield County Sheriff’s Office is looking for a juvenile, suspected of murder at a birthday party. According to reports from the Sheriff’s Office, just after midnight Sunday, an 18 year old man was shot by a teenage boy at a quincinera celebration at a house on Home Ranch Road just outside Rifle City Limits. The victim was rushed to an ambulance and taken to St Mary’s Hospital in Grand Junction where he was pronounced dead.

The shooting is being investigated as a homicide.

The suspect has been identified as D’Antiago (“Dante”) Lazaro Dominguez-Lopez. He is considered armed and dangerous.

Authorities have not released the name of the victim.