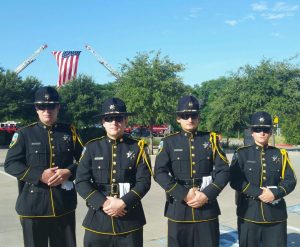 A week ago today, Dallas said goodbye to one of it’s finest.  Veteran Sergeant Michael Smith was laid to rest a week after he was killed by a gunman during a peaceful protest.  Among the attendees at Sergeant Smith’s public funeral were four representatives of the Garfield County Sheriff’s Office Honor Guard, including Deputy Matthew Graham.  Graham says the Honor Guard attended around 20 funerals since last year—many of those for retired former members of law enforcement.  He says while every memorial service is somber, line of duty deaths are particularly emotional.

While last week marked the first time the Honor Guard has traveled out of Colorado, Graham says Garfield County Sheriff Lou Vallario encourages the members of the team to keep an eye out for events they feel they should attend.

Vallario says normally he only approves sending the Honor Guard to attend in-state events but in this case, he felt the travel was warranted.

Much has been said about the irony of the Dallas police shootings because the police were there to maintain order while police procedures were being protested.  For Graham, listening to complaints is part of the job.

Some Colorado law enforcement agencies attended all five funerals last week, but because of it’s size, the Garfield County contingent could not.  Still, Graham says, they felt it was important to go.

Since its formation in 2010, the members of the Garfield County Sheriff’s Honor Guard have changed.  Besides Graham, eight other deputies lend their time to the team, Conrad, Janz, Locklear, Behr, Burris, Shtirkov, Vasquez,  Worley.