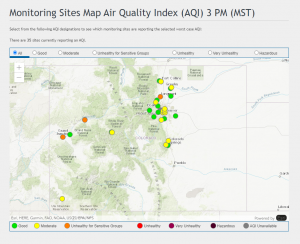 The Colorado Department of Public Health and Environment issued an air quality advisory for central and western Colorado this morning due to heavy smoke in the air from wildfires burning in California. The Advisory is in effect until tomorrow morning and could be extended. The CDPHE says anyone with heart disease, respiratory illness, the very young, and the elderly should consider staying inside as much as possible.

The air quality advisory is in effect from Moffat County to Conejos County and from Montezuma County to Jackson County. A separate advisory has been issued for the Front Range.

The smoke in the air is due to a number of fires burning throughout the west, most of which are in California, including the Dixie Fire, which has burned almost 500,000 acres since it started on July 13.