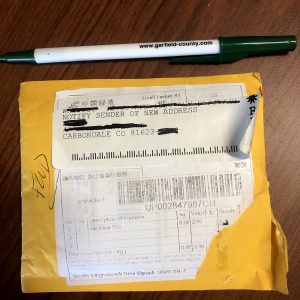 Garfield County authorities are warning residents about potentially harmful seed packets that have been arriving in local mailboxes. Garfield County Vegetation Manager Steve Anthony says one of the packages was received in Carbondale, another in Silt. One of the seed packets arrived in a padded envelope postmarked from China and labeled “necklace.” Inside was a clear plastic bag labeled “carrot seeds.’ Authorities don’t yet know what kind of seeds are in the packages, but since they are unsolicited, it’s feared they may contain invasive plants that could introduce diseases to local plants or harm livestock and animals.

Residents are urged to not plant the seeds or throw them away. Instead, place the entire package in an airtight bag and call the Colorado Department of Agriculture at 303-869-9081 or email cda_nursery@state.co.us.